Stateline Point, on the Nevada/California Border (just below the CalNeva Hotel):
On Wednesday 5 August, 2015, New Millennium Dive Expeditions, Project Baseline: Lake Tahoe divers Martin M. and Todd K., supported by Bay Area Underwater Explorer’s member and Global Underwater Explorer’s Instructor, Beto N. as videographer, conducted one of the rare (last done in 1978-1979) exploration and algae collection dives off the east side of Cal Neva Point in Nevada; also known as Stateline Point.
The goal was to visually compare the attached algae (periphyton) growth on the granite walls of the north end of the lake as compared to the south end (specifically the Rubicon Wall) and take attached algae samples from a depth of 160 feet all the way to a depth of 20 feet in 20 foot increments (160, 140, 120, etc.); last time this was scientifically done was by Stanford Loeb in 1978-1979.

The day began at 7am to set-up, organize and load our equipment.  This specific Mission was going to be executed by utilizing our rebreathers and to our knowledge, another first for Lake Tahoe (a scientific mission utilizing rebreather technology- Todd and Martin using JJCCR's and Beto using a KISS CCR).

We arrived at the lake about 10am and began unloading and staging all our equipment for the dive.  Each diver was using a rebreather, an underwater Dive Propulsion Vehicle (DPV or Scooter) and stage tanks for emergency gas if needed.  All had to be transported down to water’s edge and into the lake for all divers to access it and gear-up.  Normally this would not be much of a physical issue but with the lake some 10 feet low as compared to 2011, the distance we had to travel carrying all our gear was maximized.

By noon we were in the water, geared-up, and had completed all our safety checks, pre-breathed our rebreathers and began to head east toward the wall. Along our path in the shallow water we came upon the “swiss cheese” looking flat granite rocks that demonstrate the weathering that created these formations before the lake level submerged them.  As we continued for another 10 minutes, the sandy and boulder ridden bottom began to fall away into a deep blue abyss and this is where it got real fun; and cold... as we hit the first thermocline at about 55 feet, much shallower than expected (70 feet on the eastern shores).

We descended to the 150/160 foot range and began heading north along the drop-off (not sheer granite like Rubicon).  We scootered over some very incredible rock formations, sand chutes, rock precipices, monster boulders and desolate sand flats; a very diversified geologic structure not seen in Tahoe in one location. We passed through 2 very distinct thermoclines; one around 50/55 feet and the second at about 120 feet. This drop-off had some real unique character to it.  Water temp down there was about 46 F so after 30 minutes, we turned and headed back (our plan was for 60-70 minutes total time at 150/160 feet). What was very obvious during our 60 minute scooter ride is that the attached algae here was not as thick and voluminous as the attached algae on the Rubicon wall but the visibility was very similar; about 40-50 horizontal feet; maybe a bit more in places.

After our 60 minute run, it was time to start collecting algae samples for the scientists at UNR.  Our first collection depth would be at 150 feet.  Upon finding a suitable location to take a sample on a nice flat rock, facing up, about 3 feet in diameter, we got out our sampling kit and began our work.
A digression here is in order.  As mentioned earlier, the last time this was done was back in 1978-1979 by a Graduate Student for UC Davis named Stanford Loeb.  When he did this some 35 years ago, he presumably used a wetsuit, conventional SCUBA equipment and if he had double tanks, that would have been rare so we continue our assumption that he used a single tank and was breathing air.  Now at our depth of 150/160 feet, breathing air today would be considered "unsafe" due to extreme gas narcosis (today we add helium to our breathing gas, lowering the nitrogen normally found in air,which eliminates the narcotic effect of nitrogen at depth)especially in the 150/160 foot range.  Back then, air was all that was probably available and Mr. Loeb had a job to complete and in so doing had to use what was available.  Now as mentioned, in the 150/160 foot range breathing air is a safety concern but... this dedicated scientist took his experiment to  depths of 195 feet and not only once but in 7 different locations around the lake; the other consideration here is decompression tables and we can only assume he used the Navy tables, modified for altitude.  All this said, Stanford Loeb, was successful in all his dives as in 1980 he published his Dissertation.  At some point in the future, we will attempt to replicate his dives bringing back present day samples so as to compare to his 1980 publication; as Project Baseline: Lake Tahoe endeavors to establish a baseline set of data for water clarity in the Nearshore zone, Mr. Loeb established a baseline for attached algae (periphyton) in 1980 that our future efforts of data collection will be compared. 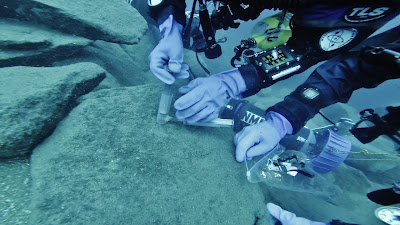 Back to the present.  5 August, 2015.  As we found out, the sampling device that we used, designed by Stanford Loeb in 1978 was not easy to use.  For us we found the device flimsy but that said, it was our first time using it.  We only had two devices with us and our first attempt at 150 feet (image to left) was a failure but our second attempt at 80 feet was a success.  I think a more robust modification to the sampling device may be in order. We want to thank the Tahoe Environmental Research Center(TERC), operated by UC Davis, for supplying us with the collection devices.
As we moved up the wall, we took rock samples at each depth.  Placed those samples in pre-marked zip lock bags and collected these samples as we decompressed from our 60 minute scooter run along the wall earlier.  In all, the 2 hour and 44 minute dive was very successful and unbenounced to us, was in one of the 1980 Loeb study locations – Stateline Point.  Pretty cool.

The lake was a bit choppy from a southerly wind (normal for Tahoe this time of year) and as we exited from our dive we had to shuttle our scooters and stage tanks through the very shallow waters and unto the beach which took a few minutes and we exited the water just about 3:30pm.  A very productive day and a huge learning experience that will definitely benefit us on future missions.

More Photos of the day: